A play about fame, success, and the lies we tell ourselves in order to keep people from taking away our erratic, 200-pound chimpanzee.

Trevor is a chimpanzee who once performed with the likes of Morgan Fairchild. Now, he’s approaching puberty and can’t even get a callback. Is it because he’s big and strong and potentially dangerous? Or does he just need better costumes? Trevor lives alone with a Sandra, a middle aged widow. Sandra knows Trevor would never hurt anyone, at least not on purpose. And just because he’s not “cute” like he used to be, she won’t send him to some dirty sanctuary, at least not to appease her paranoid neighbor Ashley and her precious newborn baby.

“Sweet, clever and weirdly touching…Trevor’s absurdist admixture of showbiz satire and real-life poignancy is so continually delightful, in fact, that you may not notice, as it flows by, how resonant the story actually is: about child actors, and actors in general; about animal individuality and animal rights; about flawed communication between loved ones; about the complex elements that enter into “acting like a man.” Funny though it often is, Trevor is good for much more than a laugh.” –Adam Feldman, Time Out (Critic’s Pick)

Please join us on Friday, November 21 at 7:30pm in the Black Box Theater for a preshow discussion featuring director Christopher Niess, the Center for Great Apes, and UCF Anthropology Lecturer Sandra Wheeler. This preshow talk is free and open to the public.

At all performances of Trevor, Theatre UCF is collecting donations for the Center for Great Apes. Please bring an item to the show to support this incredible Central Florida nonprofit organization.

We will also be accepting cash donations for the Center. Visit the table in the lobby for more information about the Center for Great Apes and Hominids Anonymous, the Anthropology Club at UCF. 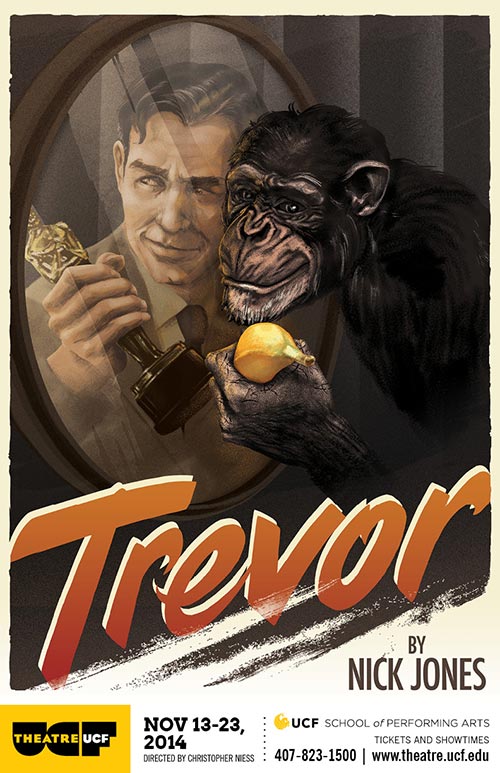